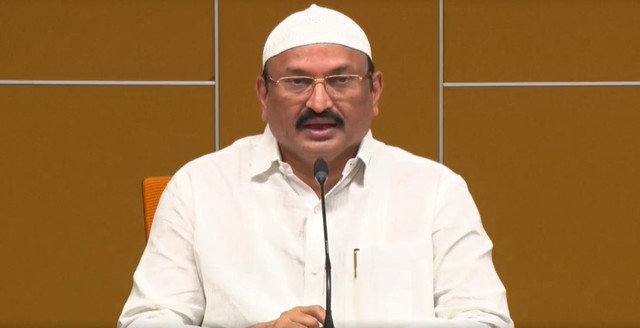 Meera said the phased reimbursement had brought darkness into the lives of the students. The Jagan regime has not been giving the benefit to over 5.18 lakh students across the State.

Addressing a press conference here, the TDP leader deplored that the Chief Minister had wrongfully spent Rs. 20 Cr for his own publicity. Chandrababu Naidu gave reimbursement to 16 lakh students at one go but Jagan Reddy was giving it in installments to a reduced number of just 10 lakh students.

Nagul Meera said that the Vidya Deevena programme was bringing joy only in the face of Jagan Reddy but not in the faces of the students. All sections of people were despising the manner in which the YCP has betrayed them. It was too late for the CM and his MLAs to go to the people’s doorsteps as they had already decided to bring back Chandrababu as the Chief Minister.

The TDP leader said that the students and parents were becoming victims of Jagan Reddy’s betrayals. AP stood in third place in quality education in the country during Chandrababu regime but now the State slipped to 19th place in just three years of YCP’s regime.

Nagul Meera slammed the CM for destroying the education sector and for making the youth to sell fish, mutton and chicken. Every engineering student had to pay Rs. 35,000 fee but Jagan Reddy was reimbursing just Rs. 8,000 all four installments put together. Polytechnic students were being given just Rs. 2,500 as against Rs. 10,000. However, lots of public money was being spent on publicity.