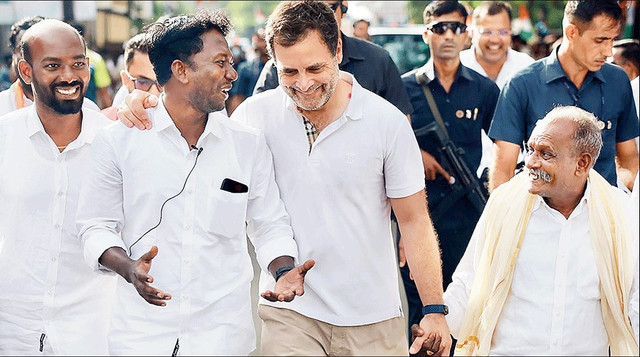 The Bharat Jodo Yatra will reach a milestone on Saturday covering 1000 kilometres after starting from Kanyakumari, the southernmost tip of the Indian subcontinent launched on 7 September 2022. The 3500 kilometres yatra will be a historic event for the Indian National Congress and the entire country. It is the longest march on foot by any Indian in the history of India. Mahatma Gandhi’s Dandi march was the longest march by foot (389 kilometres in 24 days) between Sabarmati ashram to Dandi (Navasari) in Gujarat state.

The Bharat Jodo Yatra will reach this milestone (1000 kilometres) when it reaches the outskirts of Ballari district , where a massive convention will happen with a lakhs of Congress supporters. Many co-marchers that included MLAs, MLC, block and district INC committees, workers, cadres and support staff were astonished at the energy level Rahul Gandhi displayed en route. The routine that he followed during the last 1000 kilometres, before resuming after overnight rest has motivated many co-marchers. 20 minutes of exercise, light breakfast in the morning and throughout the day 25 kilometres of walking on the hot bituminous tarmac and sometimes braving hot sun and showers as he travelled across the three southern states of Tamil Nadu, Kerala and Karnataka.

What surprised the organisers was the lakhs of people from common walks of life participating in the historic journey on foot. In Tamil Nadu, over a lakh of people joined. In Kerala it was close to 1.25 lakhs and in Karnataka, till Friday it was close to 1.50 lakh people a day .It is expected when it enters Andhra Pradesh it will be close to 2 lakh people.
As part of his Bharat Jodo Yatra, during its leg in a backward areas of Badanavalu village in Chamarajanagar district in Karnataka, Rahul Gandhi inaugurated a path with colourful interlocking tiles connecting the Dalit quarters of the village with that of the Lingayat community. Named ‘Bharat Jodo’ Road, the path was renovated in a matter of 48 hours by the INC that said it aimed to send out a message of harmony among communities. Gandhi even laid some of the pink-and-blue tiles himself, thus reopening a link that had been cut off nearly three decades ago in violent circumstances.

Rahul Gandhi during the stretch of Karnataka in Chitradurga met a number of women from the tribal communities and interacted with them they were from Banjara, Dakkaliga, Sudugadu Siddha, Dombaru, Dhombi Dasa and elicted their views on how their lives could be improved. This is the first time when a national leader of a national party of the stature of Rahul Gandhi visited them. The women were dressed in their traditional dresses and even presented a dance in his honour and welcomed him by performing an aarati.

Rahul Gandhi who has expressed his deep concern for the unemployed youth in various stages of his life as a parliamentarian chose to interact with over 2000 unemployed youth from all over Karnataka. He met them and inquired with them their strengths and skills and the causes for their unemployment and how they led their lives and supported their families. This was in Chellakere in Chitradurga district.

Despite many lakhs of people joining the yatra in various stages, it was scheduled in two sessions 7 am to 11 am and 4pm to 7 pm and in the intermittant period Rahul made it sure that he met people from the ordinary walks of life -farmers, fisherflok(both inland and marine) construction workers,teachers, village level leaders and even some prominent people, writers scholars and intellectuals at various points of the Bharat Jodo Yatra. His day began at 5am and ended at 11pm.

In ways more than many, the Bharat Jodo Yatra for the first 1000 kilometers of out a total of 3,750 kilometers, has achieved its objective of ‘Bharat Jodo’ (unite India) the Yatra has adequately illustrated how diverse a country as India and its entire diaspora could be seen as one, transcending the barriers of caste, religion, language, regions and cultures and seen as one.

Rahul Gandhi even before set out on this odyssey had told his Yatra managers to route the yatra in such way that he would see the real India and the people, after meeting an entire cross section of the society so far, people in the close circles of Rahul Gandhi feel that the objective of the Yatra has been realised to a great extent. From here (after 1000 kilometers) , it will be getting only tougher when the Yatra will traverse through difficult terrains unruly weather and new challenges.