Amaravathi, Nov 24: The aquaculture is in deep crisis now in Andhra Pradesh due to the faculty policies of the State Government, said the former chief minister and TDP national president, Mr Nara Chandrababu Naidu, here on Thursday.

Participating as the chief guest for the State-wide seminar on ‘Idemi Kharma Aqua rytanganiki’ (what is this ill-fate for aquaculture), Mr Chandrababu Naidu said that the policies of the State Government should always be in favour of the farming sector but this Government is only trying to have an upper hand on all the sectors. Those who ruled the State earlier had always worked for the betterment of all systems but due to the wicked policies of this Government aqua farmers are suffering a lot now, Mr Chandrababu observed.

The Chief Minister, Mr Jagan Mohan Reddy, always thinks of his share in every decision that he takes and he works only to mint money, the TDP national president maintained. Prices 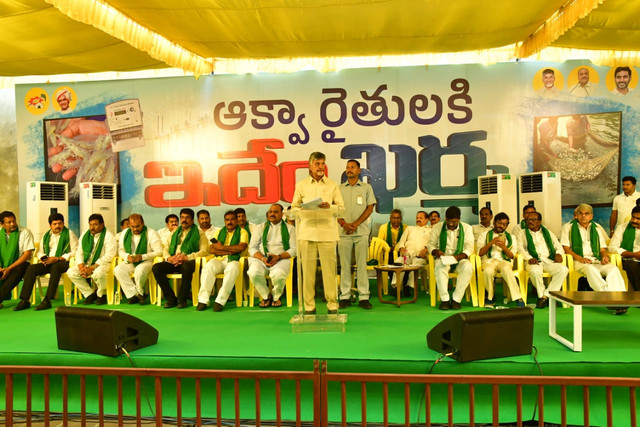 of all commodities, including petrol and diesel, are skyrocketing only in Andhra Pradesh and even the prices of essential commodities and power tariff too highest in the State, he stated.

The ‘Badudee Badudu’ programme organised by the TDP to highlight the highest tax structure in the State evoked tremendous response from the public, Mr Chandrababu Naidu noted. ”When the TDP waa in power, we encouraged every sector, including agriculture and aquaculture but now no Minimum Support Price (MSP) is being paid for any farm product, leave alone aqua products, he said.

The aqua production was encouraged in the State, including in Coastal Andha and Rayalaseema areas, when the TDP was in power and horticulture was very encouraging but now both aquaculture and horticulture suffered a lot, he remarked. Observing that ‘Idemi Kharma Mana Rashtraniki’, Mr Chandrababu Naidu said that destroying the whole system now pushing State into deep crisis. The whole farming community is facing several problems now and aquaculture has fallen a victim to the inefficiency of the administration.

Mr Chandrababu asked as to why the Ministers, who held a meeting on aquaculture did not speak to the farmers. The situation in the State has come to such a pass that the aqua farmers are resorting to commit suicide, he said.

The former chief minister felt that several enactments have been made only to control the aqua farmers. The new legislations are only aimed at making money by looting the farmers, he remarked.

Mr Chandrababu promised to supply power at Rs 1.50 per unit when the TDP comes back to power and also assured subsidy to the farming sector for installing solar energy systems.

”I am promising that quality seed and feed will be supplied to the farmers,” he said and felt that if Mr Jagan is ready to sacrifice his commission, he too can give subsidy in power and products.

The TDP national president said that Mr Jagan is ruling the State by threatening evryone, including those in the film industry. ”Even our state party unit chief, Mr Atchen Naidu, is no exception,” Mr Naidu stated.

Why Mr Jagan is harassing the farmers who sacrificed their lands for the sake of the State capital, Amaravathi, the former chief minister asked. ”During my visit to Kurnool it is made quite clear that three capitals is not possible,” he maintained.

Since the Andhra Pradesh High Court has ordered for CBI probe into the cases pending against Mr Kakani Goverdhan Reddy, he should be immediately removed from the Cabinet, Mr Chandrababu Naidu said and expressed doubts whether Mr Jagan will initiate such action as he too is facing cases.

Mr Chandrababu Naidu called upon the farmers across the State to fight for justice to aqua farmers and the TDP we will certainly stand by them.