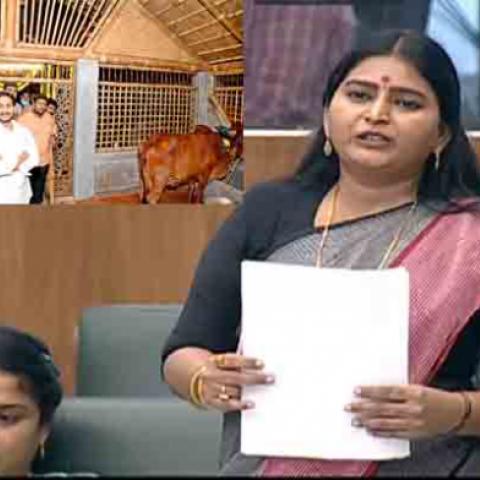 Amaravati, March 17: Praise has come to Chief Minister YS Jagan Mohan Reddy with a bovine reference and his secular outlook was applauded in the Andhra Pradesh Legislative Assembly here on Thursday.

Speaking during the Demand for Animal Husbandry and Fisheries, Singanamala MLA Jonnalagadda Padmavathi drew the attention of the House when she mentioned about the Gosala being maintained by the Chief Minister at his Tadepalli residence.

‘It is happy to note that our Chief Minister has a Gosala at his house and has been maintaining the rare and expensive Punganur breed of cow, among others.

What is more interesting is, the MLA said, there was a new arrival in the Gosala with the Punganur cow giving birth to a calf. It was named ‘Mahalakshmi’ thus bringing to the fore the Chief Minister’s secular credentials, she said drawing a round of applause from the benches.

Terming him as a statesman, the MLA said that YS Jagan Mohan Reddy was the first to bring in Animal Disease Diagnostic Labs at constituency level to treat the veterinary issues, besides establishing Ambulatory Clinics across the State