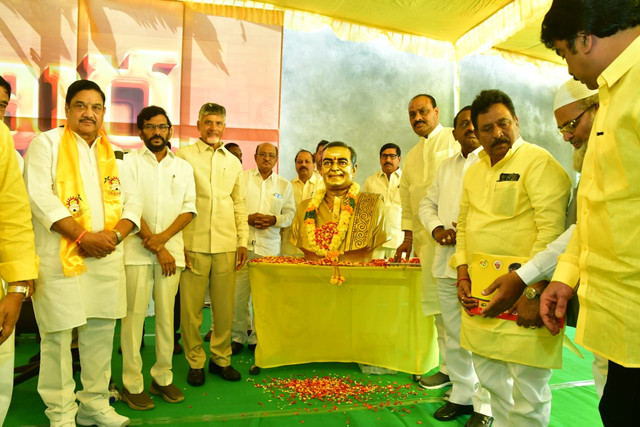 Amaravathi, Nov 19: The natresident of the Telugu Desam Party (TDP) and former chief minister, Mr Nara Chandrababu Naidu, on Saturday was highly critical of the policies being adopted by the ruling dispensation, particularly against the TDP leaders and the programmes being organised by the party in the State.

Expressing satisfaction over the turn out of the crowd for his recent meetings and the programmes organised by the TDP earlier, Mr Chandrababu said that the TDP always works with national agenda. The TDP national president was addressing the party general body meeting after launching the agitational programme titled as ‘Idemi Kharma’ (What is this ill-fate?).

Mr Chandrababu said that the TDP was a partner in several national reforms and functioned always with responsibility, either in power or in Opposition. Stating that he had become an MLA for the first time in 1978, Mr Chandrababu Naidu said that he has worked with several chief ministers in his career and when he himself was the chief minister many world leaders visited Andhra Pradesh to have first hand information on the administration.

Observing that the TDP is a classic example for welfare and development, he said that for the first time in his life he is witnessing such a hostile Government. Beginning with the TDP state unit president, Mr Atchen Naidu, three-and-halars ago, the ruling party has been harassing even social media workers till now, he said.

“This is for the first time I am witnessing the rude behavior of the police and the administration. Though we have been waging legal battles, the police officials are resorting to illegal arrests and are torturing our activists. The Supreme Court, the highest judiciary of the land, had to interfere in the case of the MP, Mr Raghurama Krishnam Raju,” Mr Chandrababu lamented.

Stating that there is no change in the attitude of either the Government or the police, the TDP national president pointed out that even the media coordinator of the TDP too was taken into custody, for silly reasons. Mr Chandrababu Naidu made it clear that once the TDP is back in power action will be initiated against such police officials.

“Though I am pained at these incidents, I have to move on democratic lines and follow the norms,” he said, adding that troubles are being created at the public meetings being addressed by the TDP leaders. Several obstructions were created even for the Mahanadu programme but still those gathered for the meeting firmly resisted them, he recalled. The gathering for his Nandigama meeting is a record he said adding “I have never seen such a huge crowd for a public meeting both at Nandigama and in Kurnool addressed a couple of days ago.” he recalled.

The same Chief Minister and the YSRCP clearly agreed for Amaravathi to be the capital when the bill was introduced in the Assembly, the former chief minister said and even recalled the statements made by the YSRCP leaders that their leader had built his house in Amaravathi. Why did the YSRCP leaders not ask for Kurnool as judicial capital at that time, he asked.

Observing that an awareness has been brought among the people by the TDP through the ‘Badude Badudu’ programme, he is of the opinion that the Chief Minister, Mr Jagan Mohan Reddy, can not escape from the cases that he is facing now. Mr Chandrababu said that if the TDP can not come back to power in the coming elections, no power on earth can save the State.

Mr Jagan is only trying to resist the TDP from coming back to power, Mr Chandrababu said that the YSRCP is destroying all sectors as part of its mission. He called upon the party leaders to take the initiative to bring more awareness among the public on the need for the TDP to come to power in the coming polls and take the ongoing “Idemi Kharma’ programme seriously.