The national and even the global media is publishing reports on the grave economic condition of the State but the ruling dispensation is only blaming and branding it as yellow media, he said. Expressing serious concern over the disturbing financial crisis the State is passing through, Mr Pattabhi said that the total debts of Andhra Pradesh is far more higher than any other State in the country.

But advisor to the Government Sajjala Ramakrishna Reddy and an IAS officer Duvvuri Krishna are only comparing the financial condition with that of the Centre. How the senior IAS officer can claim that the economic discipline of the State is far more better than the Centre, he said and asked whether he is a civil servant or a leader of the YSRCP.

“Mr Duvvuri Krishna is talking like a politician and a representative of the YSRCP,” Mr Pattabhi said and asked him to presente the details of the State economic condition before the public. “The State’s economic condition should be compared with that of other States 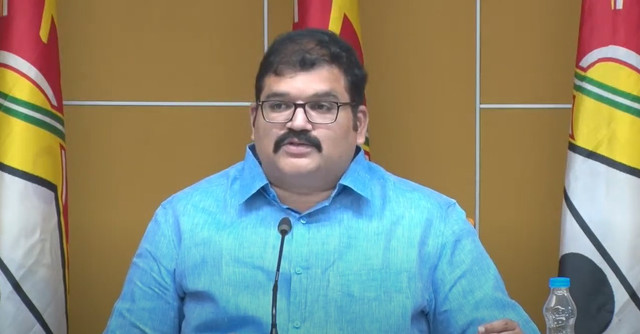 but not with the Centre. The debt GDP ratio is worse than any of the neighbouring States, except Maharashtra. But we can not compare oursdelves with Maharashtra as its revenue is far higher than AP,” Mr Pattabhi explained.

Giving the details of the revenue, debt GDP andother details of Andhra Pradesh, he asked the State Government to come for an open debate on all these issues. “How can the ruling dispesation can mention the GDP ration during the TDP regime,” he asked and gave the details when the TDP was in power. From 2014 to 2016 it was 29 per cent while from 2017 to 2019 it was 8 per cent, he stated.

Even in taking over drafts and obtaining loans from the RBI, Andhra Pradesh is on top, he said and asked why the reports on the details are missing from the website of the Comptroller and Auditor Genral (CAG) for the past three months, he asked. Mr Pattabhi expressed serious concern over the confusing trends in the State economy and felt that Andhra Pradesh is fast moving towards economic emergency.