In a letter to the Union Minister here, Lokesh said that over 1.7 lakh students would be affected if the test was not postponed. In Telugu States alone, over 20,000 students would get a raw deal. The Government should sufficiently address the concerns of medical students writing the NEET PG 2022 exam.

Nara Lokesh said that the effect of COVID-19 second wave was two-fold on medical students. One, conduct of NEET PG 2021 and subsequent counseling was delayed for over 5 months. Two, many undergrad students in Telugu states have not completed their mandatory one-year internship, rendering them ineligible for NEET 2022.

Stressing the need for postponement, Lokesh said over 1.7 lakh students would take this test nationally and 20,000+ from Telugu states alone. Every student deserves an equal chance. The conduct of NEET PG 2021 underwent multiple delays. From its original date of April 18, it was postponed and conducted on September 11. This had a cascading effect on counseling across India.

Nara Lokesh told the Union Minister that stray or mop-up rounds for filling vacancies are ongoing nationally and in several states, including AP and Telangana. It is unfair that with the counseling conducted between January-May 2022, students are barely given time to prepare for the exam, to be held on May 21. It puts them under undue stress, with high uncertainty on their future course of action, whether to go through counseling to find a suitable college, or commit to studying for PG NEET.

The TDP MLC said another complication was the plight of students who have been unable to complete their medical internship due to COVID duties during the second wave. Completion of internship is a prerequisite to write PG NEET. When the nation was facing a disastrous second wave, they put their lives on the line in executing their duties.

Lokesh said that the least that could be donw now would be to extend the exam date, giving them sufficient time to finish their internships and prepare accordingly. We must not allow a situation where the students were forced to run between the Supreme Court and the Union government to achieve what should be a straightforward and fair policy decision.

He said that the Ministry should study this issue in a holistic manner and consider postponing the exam to June or July. These students are the future of India’s massive public and private healthcare systems. Every single one of them deserves a fair chance to fight for her aspirations. 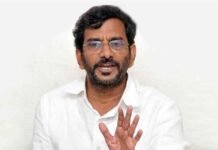 YCP inciting caste conflicts to cover up its frauds